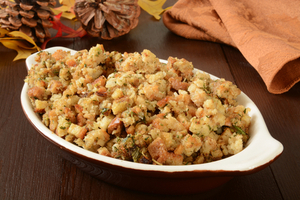 Here are my favourite turkey stuffing recipes for you – believe me, I have been cooking for many years and have made these stuffings countless times. You can trust that what I share with you is easy to make and very, very good!

I got this one from The Food Network and absolutely loved it! The combination of apples and pecans is definitely one of my favourites.

I used this recipe last Christmas and it was a definite hit! It was hard to believe that cherries can taste that good in a stuffing.

Have a wonderful holiday season and please share your experiences – your input is very welcomed and much appreciated!