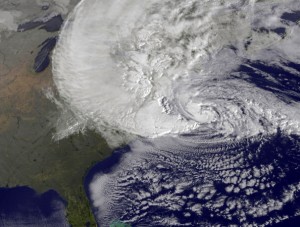 AT SEA – OCTOBER 29: In this handout GOES satellite image provided by NASA, Hurricane Sandy, pictured at 1240 UTC, churns off the east coast on October 29, 2012 in the Atlantic Ocean. Sandy, which has already claimed over 50 lives in the Caribbean is predicted to bring heavy winds and floodwaters to the mid-Atlantic region. (Photo by NASA via Getty Images)